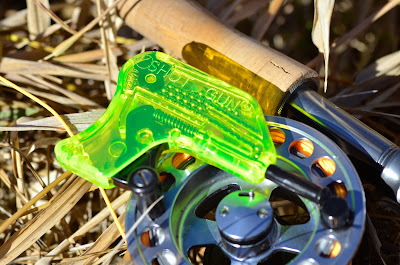 Split Shot Problems?
I’m an avid nymph angler. I use nymphing technique more than any other technique in fly fishing. One key component in nymphing is weight control. Setting up your rig with the correct amount of split shot can make or break your day. Constantly pinching and pulling spit shot on and off can damage and weaken your leader making it prone to breaking near the connection point of the split shot. I’ve tried tungsten putties and unleaded style shot, but none have been anywhere near as effective as the original lead split shot. I’ve been long on the lookout for a split shot system I could hang from a D loop on my waders instead of needing to dig it out of my sling pack or waders every time I break off or need to add weight.
Enter the Shot-Gun
This awesome device is FULL of tungsten shot that is 65% heavier then lead, which in turn means less amount is needed to get the fly down.
Its lead free, non-toxic and eco-friendly so you’re able to use it where lead has been banned.
Using the tight fitting tubing supplied with the Shot-Gun, damage to the leader is virtually eliminated.
Adding, removing, and relocating shot couldn’t be any easier with this system.
When removing shot it can be reused over and over again, by placing it right back in the Shot-Gun.

So how does it work?
Cut a small piece of tubing supplied with the Shot-Gun, and slide it on to your tippet or leader before tying on a nymph or streamer.
Insert the point of the gun in to the tube and pull the trigger, the shot is injected in to the tube and presses against the leader to keep it in place.
That’s it! Now go fish with no worries of a fish breaking your tippet off at the shot!

Field testing
My testing rig was a 5wt Blue Halo w/5wt Blue Halo WF line with an Umpqua 7.5ft 4x Leader and 4x tippet. The fly was an olive weightless wooly bugger. I chose an un-weighted fly to verify the sinking rate of the tungsten.
Casting the tungsten didn’t feel much different then casting a normal split shot rig. It did seem a little more wind resistant, but that could just be me.
The sinking rate was great, I was able to slide the tungsten up and down on my leader to change the depth and action on my wooly bugger without any hassle and with no down time, (which is unheard of with normal split shot.)
During the fall and winter times it can be hard to select, hold and pitch the shot on to the leader with freezing hands. With the Shot-Gun this worry is eliminated
The biggest worry I had using this set was the tungsten sliding down the leader after multiple double hauls or roll casts, but in my case it stayed right where I wanted it. The tubing supplied holds the tungsten nice and tight, and using larger leader and tippet secures it even better.

Final Thoughts
Retailing for $29.95. The compact size, versatility and ability to reuse the tungsten makes it hard to pass up for any angler.
If you’re a nymph angler like me you NEED this product.
To order, head on over to www.theshot-gun.com

Thanks for stopping by and taking the time to check out this product and read our review. Keep in touch for more awesome reviews on new and up and coming products.
If you have any questions on the product, comment below or hit us up on Instagram or Facebook and will be glad answer your questions.

Reviewed and written by: 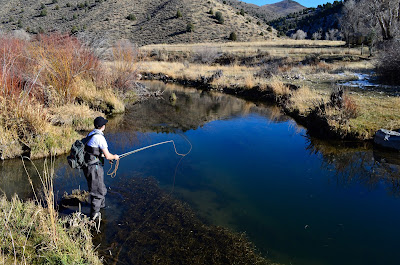 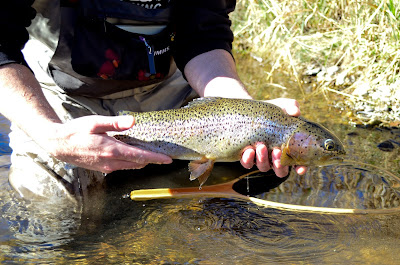 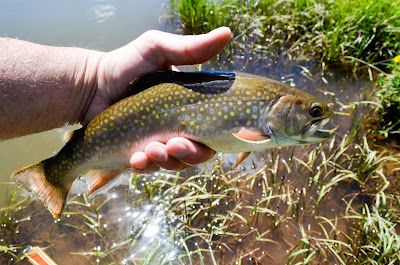